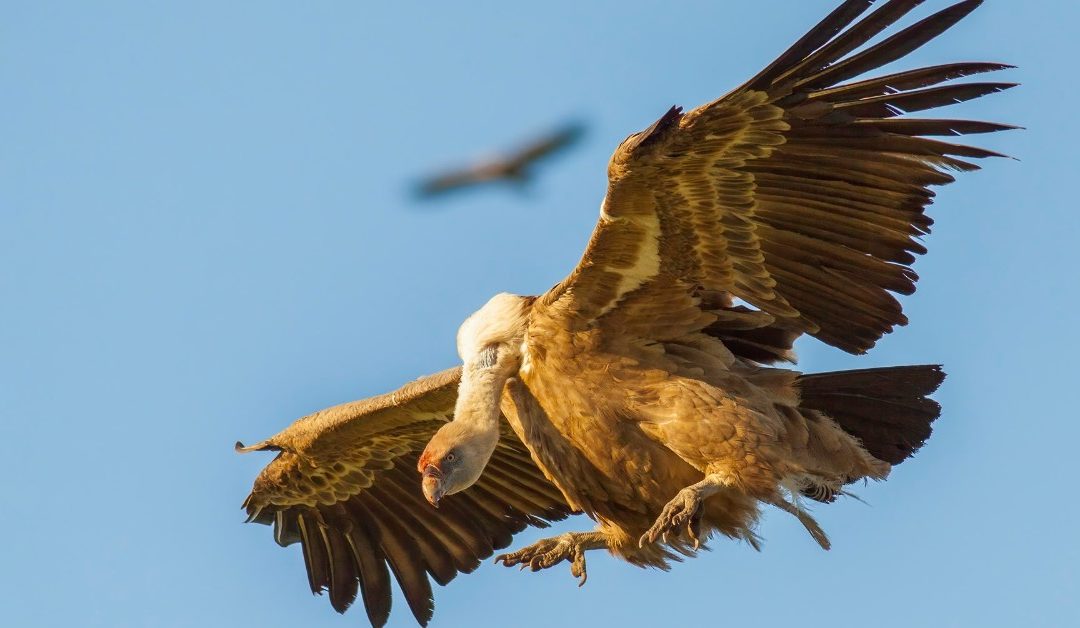 The biggest bird I ever met was a condor, it flew past me at only a few meters, And I’m not kidding. I’ll tell you all about it later on. Next to the condor, the largest birds I know are griffon vultures. And since the day we moved to Cádiz, I’m crazy about these mighty creatures that you can meet daily in this beautiful part of Spain.

During my walks over here in the most southern part of Spain, I almost always meet vultures. Especially walk 3, 5, and 8, near Tarifa, and walk 10 & 11 in Grazalema in my walking guide are perfect walks for spotting vultures!. (read more about the walking guide)

As you might know, I have rather bad eyesight but I can spot these huge scavengers from afar when I hang out laundry on our rooftop terrace. I can almost touch them when they sail past, sometimes dozens at a time, leaving me staring open-mouthed at them disappearing. Instant happiness!

Vultures and the vulture migration in Cádiz

I needed to know more about these creatures. So we spent a day with Javi Elorriaga from Birding the Strait, local guides here from Tarifa. (The first two beautiful images are also theirs!) Javier is a Basque who has been living for years in Cádiz and knows everything about the amazing and unique birdlife of this region. He took us to a few observation spots in the “Estrecho”, the Strait of Gibraltar. Where Europe and Africa almost touch, with only 14 kilometers between the two continents. This is where vultures gather, where the distance across the water is the shortest. Sometimes as many as a thousand vultures circle overhead, waiting for the right thermal wind to cross the Strait of Gibraltar. 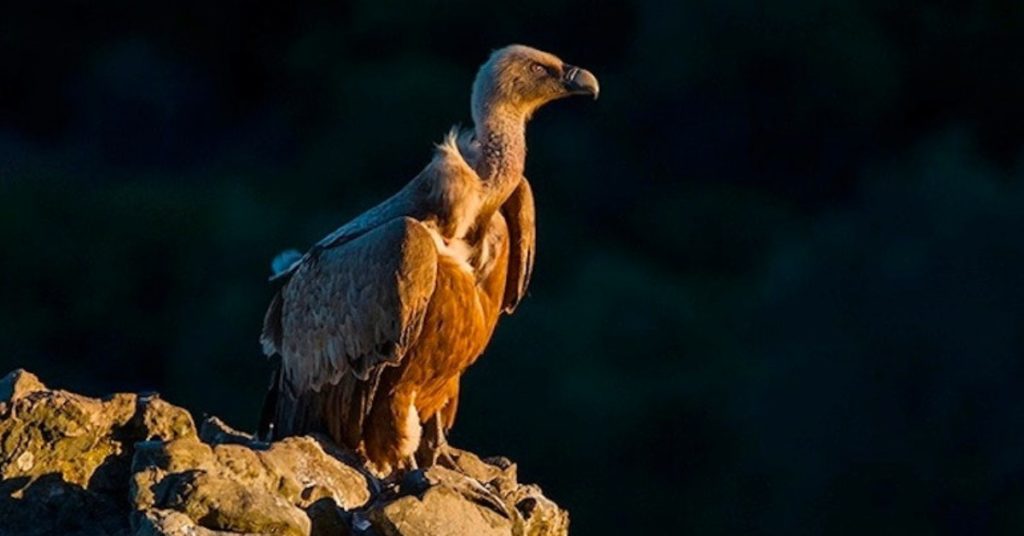 The busiest birdmigration area of Europe

Not only the vultures but also up to 36 different species of birds of prey migrate here to and back from Africa. Javi told us this is one of the busiest migration areas in Europe, where they counted 20,000 honey buzzards, 9,000 black kites, 5,000 snake eagles, 3,500 pygmy eagles, and 200 vultures in one day!

The Griffon Vulture in Cádiz

Interesting facts: The griffon vulture can grow up to 1 meter from head to tail. It has a wingspan of up to 2.8 meters. This bird can weigh up to 11 kilos and is one of the largest flying birds in the world. (Next to the condor and the great albatross) Griffon vultures are monogamous and live in groups. They lay 1 egg per year and the chick stays in the nest for half a year. Many vultures migrate to Africa in the autumn, because in wintertime, more carrion can be found south of the Sahara desert.

Personally, I think they are rather shady types, with their long, bald necks and small heads with piercing eyes. The long, bald neck is useful for rooting deep into a carcass without getting caught on their feathers.
But then again, I must admit it’s polite of them to only eat animals that are already dead. 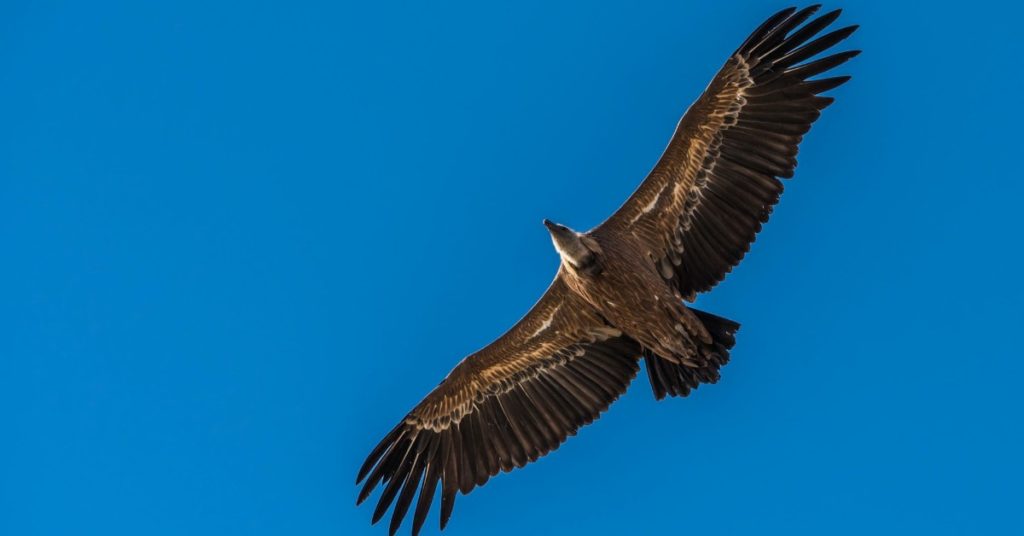 Vulture migration from Europe to Africa

Vultures migrate to sub-Saharan Africa from the end of September to December – because there is more food there, more carcasses of dead animals. Not all vultures make the crossing. Some stay here. And they don’t leave until they are two years old. In the autumn they gather in the very tip of Andalusia, where the crossing is the shortest. Sometimes they are waiting here for days for the right thermal winds, before daring the trip to Africa. They fly in daily from far, sometimes from Ronda or even further north. They can travel hundreds of kilometers per day at a speed of up to 70 kilometers per hour. And when, around noon, the earth is heated up enough for the air to rise up, and with favorable winds, they venture across the water from Tarifa to the other side. Up to 1,000 griffon vultures can gather and circle high above in the sky here, waiting for the perfect moment to cross. An amazing spectacle!

Bird migration at Tarifa where you might see six vulture species!

The most common species in this southern area are the griffon vultures, but you can also encounter two African species: the Rüppell’s vulture (Gyps rueppellii) and the White-backed vulture (Gyps Africanus), rare visitors from the western Sahel. Another exciting visitor is the Bearded vulture,(Gypaetus barbatus), who used to live in the mountain ranges of South Europe, and is now almost extinct. (Javi can show you a nest of a Bearded vulture pair near Tarifa that was occupied until about 150 years ago). A re-introduction program in the Sierra de Cazorla and Sierra de Castril has succeeded in increasing their numbers. Two other rare species that can be seen are the mighty Cinereous vulture (Aegypius monachus) and Egyptian vulture (Neophron percnopterus).

Walking in Cádiz with vultures overhead

In Cádiz, there are a number of vulture colonies where you can see vultures all year round. Like at Bolonia, but also in the Alcornocales. The Garganta Verde gorge in the Grazalema Natural Park is the home to the largest vulture colony in Andalusia, about 290 pairs live here. I dare say that you would be able to encounter vultures during each walk in the ‘Walking in Cádiz’ ebook, except maybe during the Citywalk in Cádiz…

Ah yes! That condor! I bet you would like to know where I saw that condor! Well, this is about 23 years ago. I was the Torres del Paine National Park in Chile. I took a break in a sheltered spot in the sun. Next to me was a deep ravine. And there I sat, blissfully enjoying the sun on my face, my cigarette, the peacefulness of the place. And then I hear a strange noise on the side of me, a kind of “swoosh, swoosh …” I look sideways. A condor sailed by! No kidding! Not even 10 meters from where I sat. A sound like a sailing boat. What an abnormally big creature! There he went, leaving me in a supreme state of happiness and excitement. To this day I tell the story to anyone who wants to hear it…. 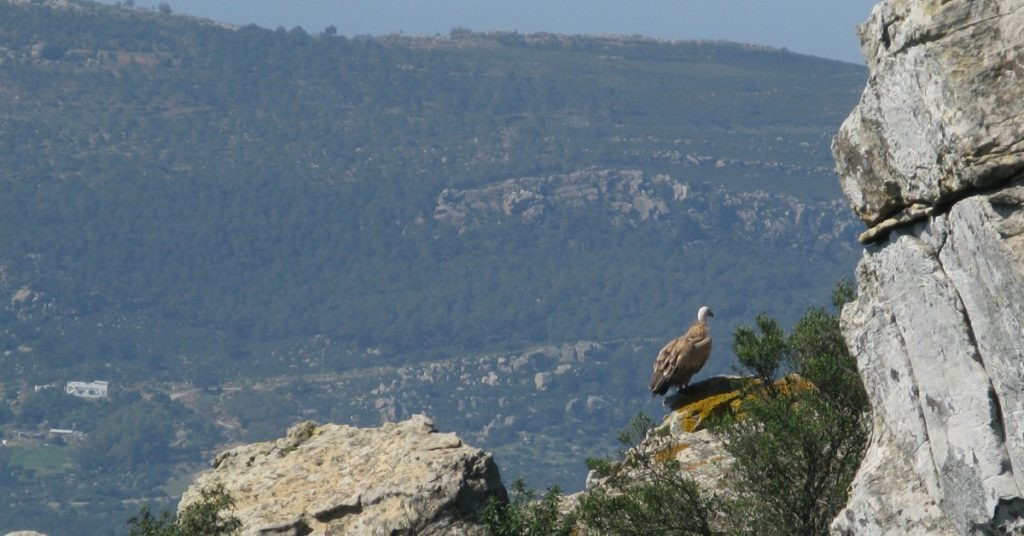 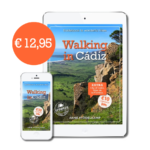